An increasing number of pizzerias are starting to serve vegan pizza options.

And to celebrate this growing trend, the makers of Teese Vegan Cheese and popular food blogger Quarrygirl have declared a national Vegan Pizza Day on Sat., Jan. 29!

Austinites have quite a few options for finding a slice. Here is a listing of some places to find vegan pizza in Austin on Vegan Pizza Day.

One of my favorite places to get a vegan pizza isn’t mentioned though. My article about East Side Pies is here. 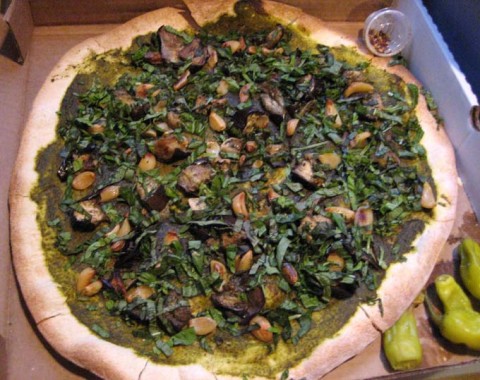 My article about East Side Pies can be found here.

I will be teaching a vegetarian travel class at REI (as part of my volunteer work with Hosteling International). The class will be at 7pm on January 11th, 2010. 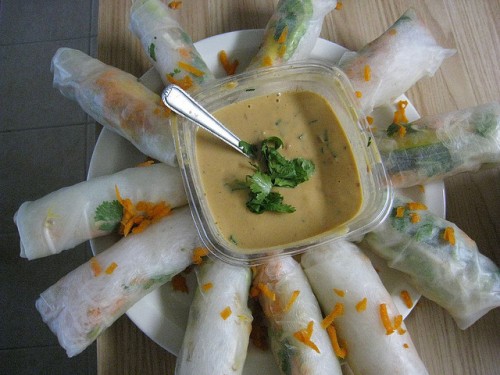 Lisa Ward is trying to open a pirate-themed vegan seafood cart in Austin and she started a kickstarter campaign to raise funds. Exciting!!

The idea of this cart makes me really happy and I definitely plan to pledge some money towards this project. I hope this post inspires some of you guys to become a backer too! Every small amount counts and there are some really cool rewards offered for larger pledges…like a wooden pirate sword with your name on it, a custom painting of your pet as a pirate, and a fully-catered Pirate Party for you and 29 other shipmates. 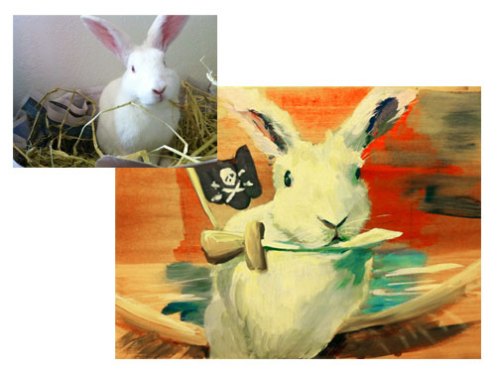 Seriously. This is cool. We want this in Austin!

Check out her Kickstarter campaign here:

Why I Love Austin Weather

Sunday it was 80 degrees. We spent all day working on our garden in the sun.

I’m totally lame. Didn’t get enough sleep Friday night, got discouraged by the gloomy weather, and didn’t make it to the Tour ‘D Vegan! Bummer.

But I found a few pictures of the event here. Looks like it was a lot of fun.

Hopefully they’ll do something similar again (hint, hint). Otherwise I’ll just have to go my own vegan bike tour.

The Austin chapter of Organic Athlete is hosting the Tour D’Vegan this Saturday!

The weather looks like it’ll be great, so I definitely plan to be there. You should too.

Here’s a summary of the event:

Also…in finding links for this event, I found a great site that lists other bike-related events in Austin.

Hello everyone.  I’m settled back in Austin and ready to write about food again.

And to recover from my year-long hiatus from this blog, I’m going to write about Counter Culture, a vegan and raw food trailer that recently sprung up on North Loop!

Miguel and I had talked about starting a vegan trailer on that street, but I ended up leaving town for a year instead. I guess it turned out to be a good idea afterall.  And based on the reviews the place has been getting, it seems to be pretty popular with the folks in the area.

The cool thing about Counter Culture is that it has drawn a steady crowd of regulars who aren’t even vegan at all. Many of them may not have rushed over to try it had there been other options nearby. But since there’s practically nowhere else to eat a quick lunch in the area (especially food that’s healthy), the vegan cart has gotten quite a bit of attention from carnivores. AND since it’s just yummy food, these people (vegan or non vegan) continue to come back. I think that’s exciting! To all those people who had their doubts whether or not a vegan cart could be successful in Austin, this is encouraging news that it can.

Anyway, I was super excited to try the place, so Miguel and I headed over to have a picnic lunch. We each ordered a different sandwich so we could try two different ones.

I ordered the Jackfruit BBQ.

Miguel got the Philly Seitan

Not sure why Miguel has a weird expression on his face in this photo, because we both really liked the food.

Luckily I work right down the street from this place, so I’m sure I’ll get a chance to try everything on the menu soon. My coworkers walk down to Counter Culture pretty regularly and they can all vouch for the trailer’s cleanliness, Sue’s friendliness, and the food’s deliciousness. Unfortunately it’s only open Thursday – Sunday…and those last few days in the work week are usually when I end up bringing my lunch. Hopefully she’ll extend her hours sometime in the near future.

But basically…I’m pretty thrilled to see a vegan food trailer in my neighborhood. And if nonvegans are flocking to this place (and pleased with their experience), they’ll probably be more apt to try other vegan food as well.

I forsee a gradual (but exciting) transformation within the greater Austin community. There’s no doubt that places like Counter Culture are helping to make the general Austin population more vegan/vegetarian friendly.

Dhaba Joy is a vegan bakery located next to 29th and Guadalupe, next to Toy Joy and across the street from Vulcan Video.

The only thing not vegan about Dhaba Joy is that coffee drinks can be made with organic dairy milk instead of soy milk. Everything else about it though is 100% vegan. All the baked goods are vegan, all the sandwiches are vegan, they have a huge case full of delicious vegan creations, and their menu seems to grow and change each time I go in there.

Their coffee is dark and strong – just as I like it.

(Don’t get too excited about ordering this skull face coffee though – I’m pretty sure it’s not a typical creation. One of the guys working at Dhaba Joy made it for his friend and I asked to take a picture of it.)

Their juices are also amazing. You can watch as they make them from fresh ingredients right in front of you. My favorite is the “Luck Now”, made with carrot, celery, ginger, and cayenne. Their ginger lemonade is also a good choice.

This is a great place to take non vegans just to show them how flavorful and delicious vegan food can be. Occassionally I feel like they overcompensate by making things extra super duper sweet, but I think I’m probably alone in this opinion. Most people like their deserts to be sweet, right? I guess I’m just not a huge fan of sweets. I think I’m also one of the few people in the world who don’t really like ice cream all that much….which is probably why I love their oatscreme swirl (their vegan ice cream that tastes more like blended, frozen oatmeal than ice cream).

Dhaba joy seems to be growing! When they started, they had some vegan and some non vegan items. Now they only serve vegan items.

Next they added vegan sandwiches to the menu (like Tempeh Reuben, Chicken Salad, and some others).

Then they added vegan quiches (like Tofu Spinach or Tempeh Cheddar). They were so yummy looking, I had to try both. I was right – they were good. 🙂

They also starting serving sushi, soups, salads, vegan mac and cheese, and a few other things. I think their slow, steady growth is a good approach and one that will prove to be successful for them.

Now they even make large vegan cakes that can be ordered for parties (which I learned during my birthday). Being the spoiled birthday girl that I am, I got the pleasure of getting to try both of their cheesecakes. They were delicious, but I think I’m partial to the lemon one (the raspberry one was a tad bit too sweet).

My coworkers bought me the vegan raspberry cheesecake:

My mom bought me the vegan lemon cheesecake:

Oh, did I mention that Dhaba Joy is next to the best toy store in Austin?

Toys and vegan goodies! Seriously, how can you go wrong with that?

I really love Titaya’s Thai Cuisine. The restaurant is clean and comfortable, they have a great lunch special ($6.50, M-F from 11:00am to 3:00pm), and food portions are large and delicious. Another thing I like about this place is that when you order something extra spicy, they take you seriously and add lots of spice rather than assuming you don’t really mean it.

You can substitute tofu for every meal item and there’s a small notice at the bottom of the menu saying that all vegetarian and tofu dishes are automatically prepared vegan. I haven’t grilled the waitstaff about their definition of vegan – I’ve always just assumed (and hoped) that it is the same as mine. Next time I go, I should ask. The lunch special usually comes with a chicken coconut soup, but if you order a vegetarian dish they usually know to bring you a salad with peanut sauce instead. If they don’t mention the salad option though, remember to ask for it – as they may forget and try to serve you the chicken soup.

There are sooo many options here for vegetarians and vegans. I’ve had the Gang Dang, Gang Musmun, Green Curry, Pad Cashew, Pad Ginger, and several others. I wish I had a photo of all these dishes, but I’m usually so excited to eat there that my camera is an afterthought.

Here are a few things I’ve ordered and remembered to photograph:

The waitresses at Titaya’s Thai Cuisine also make me happy. They’re really nice and helpful. If you’ve been there more than twice, they usually remember your face and greet you with a big smile. If you’re having trouble ordering, they’ll make suggestions for you based on your preferences and they’ll tell you honestly if they think a particular dish will taste weird with something added (I tried to add basil once to something and the waitress said she thought it was a bad idea. I appreciated that she didn’t just let me order it and end up disappointed).

I go there pretty often with my grandparents. We always get spring rolls as an appetizer.

Titaya’s recently opened and I’ve noticed that it’s been getting increasingly crowded during the weekdays. I’m glad that people are spreading the word about this great Thai place.

This place makes me giddy and excited that I’ll be going to Thailand soon and I’ll get to eat Thai food every day for a month!

I just discovered Bombay Express recently because a coworker recommended it to me. (thanks Dale!) It’s located near Curry in Hurry on Parmer Lane, although it’s just off of I35. They’re open Tuesday through Sunday from 11:00am to 9:00pm.

Like Curry in Hurry, Bombay Express also unfortunately uses Styrofoam containers and plastic silverware. Food is great though – I’ll definitely be back. Everything is vegetarian, many items are vegan, vegan dishes are clearly labeled, and some vegetarian items can be prepared vegan upon request. It’s hard to go wrong with that. Plus – the employees were super nice. I couldn’t decide what I wanted so they offered to make me a vegan version of their vegetarian combo.

Here’s their menu. There are so many other things to try, I’ll have to go back again soon.

Team Feed Everyone
Create a free website or blog at WordPress.com.